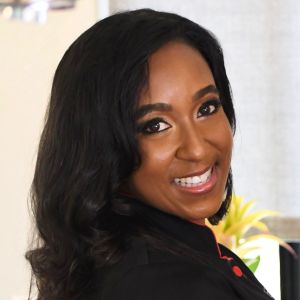 Chef Michele Wilson is a resident of Oakland, CA and owner of Gussie’s Chicken and Waffles located in the historic Fillmore District in San Francisco. Gussie’s is known for traditional Soul Food at its Best! Chef Michele has taken her grandmother Gussie’s recipes and a few of her own to create a restaurant where you can get food like Grandma used to make! She has over 15 years experience in the food industry and has been featured on many local television shows and publications.  She was a guest Chef on “Grill It with Bobby Flay” on Food Network where she wowed viewers with her grilling techniques and cocktail recipes.  She was also a contestant on ABC’s “The Taste” and “Guy’s Grocery Games” on Food Network.  She has a daughter in college and is newly married!  Michele loves to entertain and incorporate quick and easy dishes into her everyday lifestyle.  Her food philosophy is Cook, Eat, Love.  Her first cookbook, Edible Desires; How to Seduce Your Mate through the Art of Cooking is due to arrive on shelves this Spring.

CHEF MICHELE WILSON PREPARES A CARIBBEAN FAVORITE MIXING THE ISLAND FLAVOR OF COCONUT WITH THE HEAT OF CAYENNE AND THE SPICE OF PAPRIKA DIPPED INTO A SWEET TAMARIND AND GINGER SAUCE.

On February 26, 2016, SF Noir kicked off its Wine and Food Festival with a cooking demo by Chef Michele

Chef Michele Wilson is a resident of Oakland, CA and owner of Gussie’s Chicken and Waffles located in the historic